A strong heritage, in the centre of Birmingham's jewellery quarter.

History of the Jewellery quarter

Our story began in 1973 but the history of the world famous Jewellery Quarter, home of jewellery making goes way back.

A survey of 1553 named one of the first goldsmiths of Birmingham, Roger Pemberton. During the 18th and 19th centuries, Birmingham prospered from the Industrial Revolution and developed into a large industrial town, manufacturing a vast range of products. A considerable trade developed in the manufacture of gilt buttons, cap badges, pins and small metal toys. According to the Birmingham Directory of 1780, there were 26 jewellers at the time. It is thought that by the start of the 19th century, there were around 12 jewellery manufacturing companies employing approximately 400 people.

The jewellery trade developed around the Vyse St and Warstone lane area, with wealthy factory owners eventually developing the St Paul's Church area as the leafy residential area adjacent to the main Jewellery Quarter. This area too eventually became converted to workshops and factories as the district developed at a huge rate.

Named after Sir Howard Vyse, Vyse Street has evolved from what was a leafy residential suburban street looking out on a green and pleasant Hockley Heath in the mid-19th century to the bustling, marvellous shopping high street of today.

The Birmingham Jewellery Quarter is a designated conservation area with over 200 listed buildings and has been described by English Heritage as ‘a unique historic environment in England – a national treasure....a place of unique character’ and ‘jewellery and metalworking which does not seem to exist anywhere else in the world’.

The shopping area now in existence is a recent development over the last 50 years as the area became derelict due to recession and decline. War bomb damage and clearance led to a rebirth of the area with modern retail and workshop developments but tastefully keeping the best of the flamboyant architecture of the industrious past.

Joseph Camberlain and the clock

This fine clock tower, located centrally at the junction of the districts main streets (Vyse St, Warstone Lane & Frederick St.), was erected in 1903 in honour of one of Birmingham's favourite sons & most respected public servan.ts, Joseph Chamberlain, MP for the area in the late 1900's.

Chamberlain lived in the Jewellery Quarter for a while, on Frederick Street. In addition to the great work he did for the city of Birmingham, Chamberlain also championed the jewellers’ cause, especially in his campaigning work to abolish Plate Duties - a tax affecting jewellery tradesmen of the time.

The Chamberlain Clock has recently been restored to its original glory after falling into a state of disrepair, having stood in its original condition for over 80 years. In the 1980's the clock tower was refurbished and repaired and now stands, proud and tall again at the heart of the Jewellery Quarter.

The Jewellery Quarter Business Improvement District (JQBID) is a defined area within which the local business community will work together to deliver projects and services that improve the business environment and the experiences of visitors and service users. 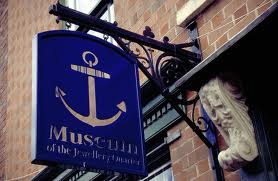 To discover more about the history in jewellery making you can visit the Museum of the Jewellery Quarter.